Metal Art enigmatic and connected to the roots 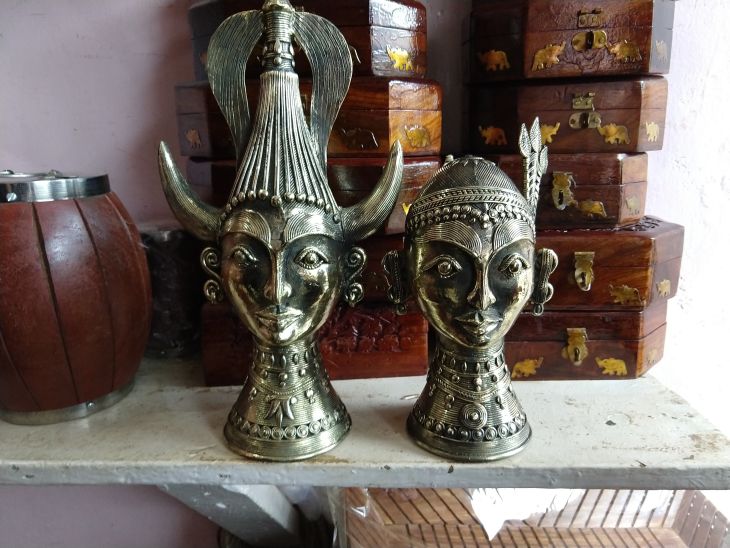 This blog is about one of our top art and crafts as its tradition goes more before we discovered religion.

The famous dancing girl of the Indus Valley civilization was one of the oldest artefacts known to mankind supposedly 5000 years old. This is one of the first art forms ever made using metals like brass and this technique is called investment by lost wax method. I have visited a few Harrapan sites and was always mesmerized with the art, jewellery of times when there was no religion (at least not as we know it now). This art form was born out of the natural gift humans have of imagination based on things we see around us and then using the materials available to be able to deliver priceless artwork.

This inquisitiveness and a few metal artwork I saw on an airport took me to a place in central India called Bastar where this kind of work is done by the natives who have been doing this I guess for ever, It is very interesting to think how this art form moved to central and eastern part of India from the Indus Valley civilization as I could not find such major and similar work in western and northern India. The travel to Bastar is not for the faint hearted as it is an area where there is a a lot of violence happening and the area is not well developed. So I had to plan my travel in such a way that all our travels were in day light and in the evenings we were at a safe place. Luckily, I have a friend who has his in laws house in the area of Bastar, his name is Mukesh and he readily agreed to host me at his house and also take me to Bastar. Basatar was about 180 miles or 290 Kms from Raipur but the roads in some areas were awesome and in some we had to find where they are! We drove through some stunning fields and then dense forests it was an amazing journey, the stop overs were far and few as there are not many restaurants or motels on the route. In the evening we camped at Jagdalpur which is the largest town in that region. We had to make sure we sleep in mosquito nets as the mosquitos were many and of the size of the common fly we find in cities. The next day morning we set out to see the metal art work and went to various small villages like kondagaon were the make these beautiful hand-crafted metal work. These artists have no formal training and have learnt it from there fathers who learnt it from theirs.  The artisans are very humble and respectful and most of their creations are inspired by nature, plants, animals and rituals they have seen. Sometimes I saw artefacts which were a mix of a tortoise body with legs of horse and a horse face but having horns and the artist wanted the advantages of his favourite animals and crafted in to one. Most of these artists were shy and we decided not to click too many pictures of the artisans. Here are a few pictures of them working and some of their work

A lot of these artists belong to a nomadic tribe called Dokra or Dhokra who were a group of craftsmen, scattered over the regions of central and eastern India, their wares were identified by their beautifully shaped and decorated metal products. The amazing metal art objects have motifs inspired by indigenous folk culture and are unique due to a primitive, instinctive style which is original. The main thing of these ornamental sculptures is simplicity, charming motifs, a rustic look and imaginative, minute designs and patterns. Also when ordering you need to understand that these are hand made so no two pieces will be exactly identical.

Some of the items which we clicked are shown below, we have a lot of samples for you to physically see and order at our place.